Why do tropical cyclones have eyes?

If you have been lucky enough while classifying storms on Cyclone Center, you have come across a tropical cyclone with an “eye”.  An eye, as shown in the image, appears in the center of the storm as a generally circular area of warm (low) clouds.  The appearance of an eye usually means that the tropical cyclone has become very strong with winds exceeding 64 kt (74 miles per hour).  But how does this nearly cloud free region form? 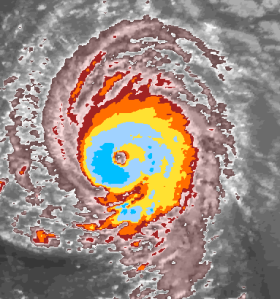 Hurricane Isabel (2003) showing off her well defined eye. The eyewall is the ring of blue clouds surrounding the eye.

As we have mentioned in a previous post, a developing tropical cyclone features a lot of incoming warm, moist air that rises in around the center of the system.  After a while all of that air “builds up” in the upper portions of the disturbance, creating a situation where the air begins to flow out and away from the storm.  However, in stronger storms, some of the air flows in toward the center of the storm and begins to sink toward the ocean surface.  When air sinks, it warms, leading to the evaporation (drying out) of clouds.

This leaves a large cloud free area in the mid-upper portions of the middle – the proverbial “eye”.  Eyes are the calling cards of mature tropical cyclones, which is why Cyclone Center asks you so many questions about them when you see them.  Surrounding the eye is the eyewall, a ring of very cold clouds and an area that features the strongest winds of a tropical cyclone at the surface.

Surface weather conditions in the eye are typically calm, with light winds and partly sunny skies.  But as our ability to peer into the eyes of storms has increased, meteorologists are discovering that eyes are more complicated than we thought.  Hurricane Isabel (2003) showed off what looks like a monster starfish in its eye. 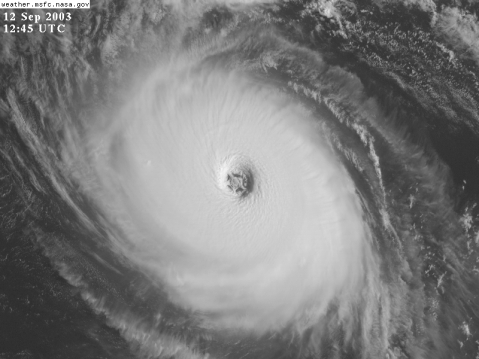 Hurricane Isabel (2003) appears to have a starfish in her eye!

This feature survived for several hours, rotating around the eyewall like a ball in a spinning barrel.  If you have ever wondered what it is like inside of a hurricane eye, check out the video below:

Seems very calm…but under those towering white clouds are winds in excess of 150 mph!!  Head on over the Cyclone Center and help us find tropical cyclone eyes.