Why Cyclone Center? A Detailed Response

Tropical cyclones have enormous impact on life and property around the world. These storms can destroy cities, economies and even armies. However, our ability to understand the strengths or even just to count the numbers of storms that have occurred globally or even in each ocean basin is limited by deficits in the historical data. For instance, there are studies in published literature that suggest that typhoon activity is both increasing and decreasing in the western Pacific Ocean. Clearly both cannot be true!

Changing personnel, forecasting procedures, technological innovation and the introduction of new types of satellite data have created a record of past tropical storm information that is heterogeneous – that is, non-uniform. So looking at how the climatology or history of storms has changed over time is quite difficult and riddled with assumptions. For example, researchers interested in the number of tropical cyclones that have occurred each year throughout history have to make decisions about what years to begin or end their studies – the “period of record.” This choice can influence the results substantially. One possible choice is to choose a starting date as of when all recordkeeping began, say, 1851, ending in the present. This very long record would have a greater number of storms included but the data quality may not be as good as if the researcher made a different choice and started in the 1980’s satellite era. This alternative choice, limiting their years of interest to the time period when the entire globe has satellite observations would influence the number of storms included in the study. Before satellites, how would anyone know if a storm existed if it did not, in some way, impact humanity? Neither choice is “incorrect” but the assumption that is made clearly affects the results. 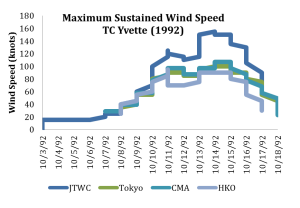 Looking at the history of one storm at a time, even fairly recent storms have discrepancies in their historical records. For example, four forecast agencies were responsible for tracking Typhoon Yvette in 1992 – the Joint Typhoon Warning Center (US Navy), the Japan Meteorological Agency, the China Meteorological Administration, and the Hong Kong Observatory. These agencies have different methods and procedures for estimating the wind speed in tropical cyclones. The differences can be quite large. As shown in the graph below, on October 13th, 1992, the Joint Typhoon Warning Center estimated Yvette’s winds to be 155 knots while The Hong Kong Observatory estimated only 90 knots. This would be the difference between a Category 2 and Category 5 tropical cyclone on the Saffir-Simpson Hurricane Scale used in the United States. It isn’t clear what the best answer is for Yvette.

Using group consensus, citizen scientists making storm strength estimates in CycloneCenter.org can help clear up this confusion. By participating in this endeavor, you and other citizen scientists are analyzing the satellite images through a process similar to the Dvorak Technique used by meteorologists, thereby providing a more consistent record of tropical cyclone strength. Your choices as you classify storms – your very mouse clicks – will lead to a better understanding of tropical cyclones. You never know, the statistics from the decision process you use to classify storms could even lead to further refinement of the intensity estimation process meteorologists use as well!