This week Cyclone Center introduces Hurricane Katrina (2005) as one of our featured storms.  This is the 8th anniversary of Katrina’s assault on the northern Gulf of Mexico coast.  The city of New Orleans, despite a massive system of protective levees and pumps, lost over 1500 souls, almost all from drowning when water flooded about 80% of the city.  Since then,  millions of dollars have been spent on the repair and upgrade of the levee system in and around metro New Orleans.  Are they ready for the next one?

“We’ll be absolutely ready for it,” said U.S. Army Corps communications officer Wade Habshey in a recent Discovery News article. “What we have in place now can withstand a Katrina-level storm.” 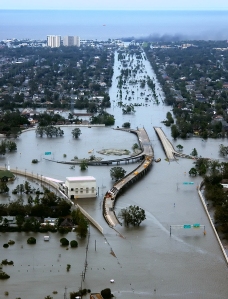 But what exactly is a “Katrina-level” storm?  Winds in downtown New Orleans rarely exceeded minimal hurricane force at the peak of the event.  Storm surge and the strongest winds from the weakening Katrina were focused well to the east in coastal Mississippi.  And yet levees failed, water flooded significant portions of the city, and over 1,500 perished.

An even bigger concern in the long-term are geological changes occurring in the area; coastal portions of Louisiana are sinking into the ocean as climate-forced sea levels continue to rise and land areas sink.  This exacerbates the threat of  hurricanes for a region that experiences one on average every couple of years.  Many climate scientists now believe that hurricanes will be stronger on average in the future as the ocean, which provides the fuel for the storms, continues to warm.

What more should be done?  Government officials exude confidence that the improvements to the levy system will hold up, but we’ve heard that story before.  Claims were made soon after Katrina that the levee system was designed to withstand a Category-3 storm , not something like “Katrina’s strength”.  We’ve already seen that Katrina wasn’t even a hurricane in New Orleans – what happens when a real Category-4 or 5 storm hits the area?  We can only hope that residents will have left, because it’s a very good bet that there will be little dry land to stand on.

By the time Emily made her appearance in the second week of July, the 2005 Atlantic season had already produced four named storms (tropical storm strength or better) and was on its way to a record breaking performance.  So it was hard to stand out from the crowd that year, but Emily sure did.

Emily formed the way many of the strongest tropical cyclones do in the Atlantic – as a tropical “wave” or disturbance that left the coastline of Africa on July 6.  She struggled at first to get her act together, as dry air penetrated her core and the upper level winds in the area kept trying to rip her apart.  But Emily kept it together long enough to obtain tropical storm status on July 11.  But the fun was just beginning. 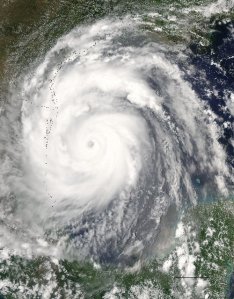 Hurricane Emily readies herself for the final plunge into Mexico

The next day, the “steering winds”, or the upper level winds in the atmosphere that push the system along, increased in intensity.  Emily’s forward speed increased from a sluggish 10 kt. to a quite respectable 17 kt.  Although this initially made Emily’s environment less favorable,  recon planes noticed her winds at the surface unexpectedly began to increase.  Everything seemed to fall into place and just 2 days later Emily was a major Category-4 hurricane with maximum winds near 115 kt.

As Emily passed south of Jamaica, the records began to fall.  She became the earliest (since records began in the 19th century)  tropical cyclone to reach Category-5 status.  Furthermore, Emily to this day is the only known storm to ever achieve Cat-5 intensity in the month of July in the Atlantic.

Fortunately, Emily spent most of her time over the ocean when she was strongest.   But she did pass directly over Grenada, Cozumel Mexico, and northeastern Mexico near San Fernando.  Damage was unexpectedly light in the Yucatan, with mostly minor wind damage and flooding reported.  Northern Mexico appeared to receive the worst of the storm, with 90,000 people driven from their homes and thousands of buildings destroyed.  Miraculously only 6 deaths were reported from the storm, 4 in Jamaica when a car was pushed over a cliff from flood waters.

Go to Cyclone Center today and start classifying Hurricane Emily.  She was truly a memorable one.  Much of the information given here and more can be found in the U.S. National Hurricane Center tropical cyclone report for Emily.