A paper just released online in the journal Nature Geoscience (Mei and Xie 2016) shows that typhoons in the northwestern Pacific Ocean have intensified by 12-15% over the last 37 years, including a dramatic increase in the proportion of category 4 and 5 storms. Previous studies on trends in typhoon intensity for the same region have been contradictory because of differences in the operational tropical cyclone wind speed datasets  used.  How can Cyclone Center help reconcile these differences?

The authors of this study compare two sets of wind speed data for the study: the Joint Typhoon Warning Center (JTWC, a United States agency) and the Japan Meteorological Agency (JMA).  Before direct comparisons can be made, however, the JMA data are adjusted to account for differences in how the wind speed is determined.  Although the corrections are reasonable and show that the JMA trends are consistent with JTWC, the authors comment that [emphasis is mine] “the philosophy of creating a homogeneous data set is very appealing, and such a data set of improved accuracy would be highly valuable.” 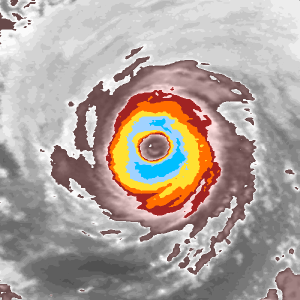 Hurricane Fernanda (1993) shows off her large and symmetrical structure on cyclonecenter.org.

“Homogeneous” is a fancy way of saying we want to treat the data the same way.  The most obvious advantage to this approach is that differences in the results can be attributed to differences in nature, rather than in the way we treat or interpret the data.  Since direct observation of tropical cyclones (especially strong ones) are rare, forecast agencies almost exclusively rely on subjective interpretation of satellite images and “in house” rules and adjustments to produce their typhoon intensities.  Imagine four people looking at the same piece of artwork – you will likely get four different interpretations of the same picture.

With Cyclone Center, we have at least 10 people looking at the same piece of artwork (or satellite picture in our case).  We might get 10 different interpretations, or we might get one or two.  But what makes our approach valuable is that we apply the same set of rules and adjustments to your classifications, producing a homogeneous tropical cyclone dataset.  This is much more appealing than dealing with four different opinions.

For the rest of September, we are focusing on the northwestern Pacific and require at least 100,000 classifications to begin our analysis of the region.  You have already provided over 25,000 in just five days but we need much more help.  Head on over to cyclonecenter.org and help us reach this important goal.